Charming, engaging, and an artist who can speak firsthand about her immigrant experience in America, singer-songwriter ALFA delivers lovingly-crafted pop songs as her soundtrack to life’s many stories - true or otherwise. Host Eric Gnezda of the PBS show “Songs at the Center” calls Alfa, “everything you want in a singer-songwriter. She transcends genres, reaching audiences of all ages and backgrounds.” Meanwhile, colleges from the East and West Coasts, the Midwest, and the South also love Alfa’s positive, multi-instrumental live show, which features distinct covers and relatable originals sung with guitar, ukulele, and kazoo.

“The show with Alfa exceeded my expectations! We had a great student turnout, and she interacted with the crowd wonderfully,” says Eastern Connecticut State University. “Alfa was amazing…[she] delivered a phenomenal performance,” says Morton College in Illinois.

An all-American, Philippine-born, New Jersey-raised girl with a preternatural love of music, Alfa has polished her performance chops over 13 years in the New York and Los Angeles music scenes, first moonlighting as a musician while getting her degree at NYU. Her catchy songs and captivating voice have landed her opening slots for major acts like Sam Smith, Shawn Mendes, Us the Duo, and Howie Day, and placements in shows like “Keeping Up with the Kardashians” and HBO Canada’s “You, Me, Her.” She is now an artist with Warner Music Philippines. Other venues Alfa has played include the Bluebird Cafe in Nashville, Troubadour in L.A., and the Highline Ballroom in NYC. Alfa is endorsed by several companies including Kawai Pianos, D’Addario, Washburn Guitars, and Mya-Moe Ukuleles. When not performing, she is a private music educator in L.A. 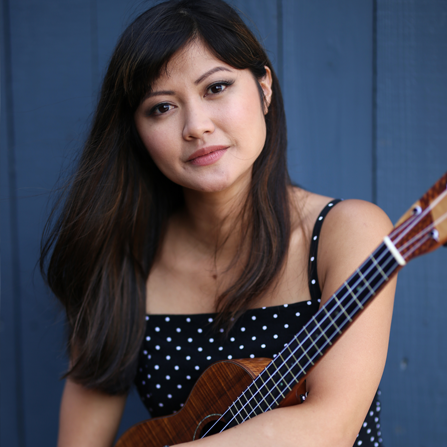 The show with Alfa exceeded my expectations! We had a great student turnout, and she interacted with the crowd wonderfully. After her set, she stayed after to talk with students and had a photo op with them too which was great. All the students in attendance seemed to enjoy her music as well.
- Eastern Connecticut State University

The show was great! Alfa was an absolute wonder to work with. Our audience was enamored with her talent. She was very approachable, kept the audience engaged and she stayed after way longer than her set time talking to and mentoring students.
- Casper College

Alfa was amazing! She’s super sweet and delivered a phenomenal performance. The students loved hanging out with here and many sand along to familiar songs. Thanks for working with us, have a great weekend!
- Morton College