A UC Berkeley graduate, Sonia Rao was on her way to becoming a psychologist, with offers from both Stanford University's doctorate program and Columbia University's master's program. Sonia decided to go a different way, though. She turned down both of these offers, left her job at a consulting firm, and moved to Los Angeles to pursue her love of music. Sonia grew up studying violin, piano, guitar, flute, and ukulele, but classically trained, had always stayed within the strict confines of what her traditional teachers and orchestra conductors taught her. After experiencing an unexpected personal loss when her boyfriend passed away, Sonia started writing songs for the first time as a way to process what had happened and fell in love with music in a new and more personal way. This new relationship to music is what Sonia says made the decision very clear for her. Being first generation Indian-American - the child of immigrants - it was a difficult choice to make and one that challenged her relationship with her family, but it has proven to be the right one in hindsight.

Since then, Sonia's songs have been featured on more than 35 shows including MTV’s Jersey Shore, E! Keeping Up With the Kardashians, and CBS' The Bold and The Beautiful, and her song ‘I Wanted the World’ captured hearts in the movie trailer for the film adaptation of the NYTimes bestselling novel ‘So B. It’. Of the more than 70,000 people who auditioned for NBC The Voice on her season, Sonia made it to the top 40 finalists and was praised by Christina Aguilera and Adam Levine for her raw and soulful performances in the first two episodes of the season. Beyond her success in the television and songwriting world, Sonia does speaking around gender and identity and her 2018 TED talk, ‘The shame and power of being a woman’ proved to be both timely and powerful. Sonia released her third album in 2016 followed by a 32-city tour across the United States, Japan, and Indonesia. 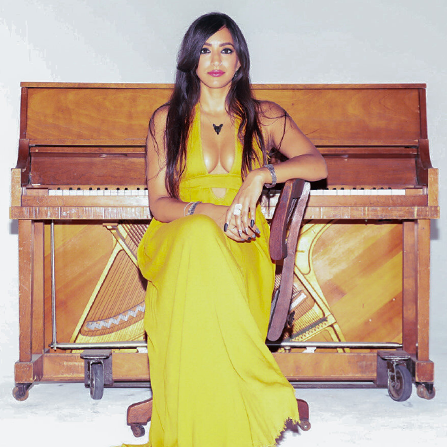 She was great! Probably one of most chill and calm performers we've had. A ton of students were asking about her and kept shouting that they loved her!
- Penn State University - Abington